A few weeks ago, I went to the conference of the Association of Writers and Writing Programs in Los Angeles.  I attended some great panels, learned a lot at the book fair, found some exciting new reads, and spent time with friends that I needed to see more than I’d known.  But perhaps the best part of my time in LA was the two and a half hours I spent drawing in a café.  I went in for the chocolate braid and coffee, but I stayed for the drawing that absolutely compelled me to keep my seat despite the sunshine and palm trees.  For a while it was a sketch I could have walked away from, but at some point (what was that point?) I was in so deep that I felt like a rock in the river of time, immune to the current and totally absorbed in the present moment, which was so much more than a moment because it contained within itself the past and future of the drawing as well—what it had been, what it would be, and what it was becoming.  You probably know what I mean.

Windows.  They make you feel a sense of place through an implied perspective and viewpo 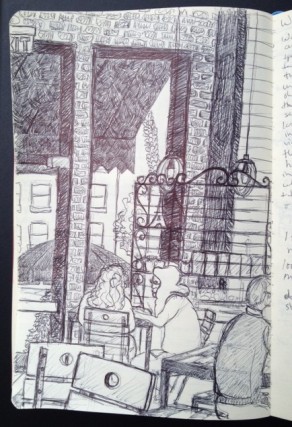 int—one of countless others.  So the scene is something special, one small section of this giant earth.  A window creates something temporal, situated, and stable.  People pass by.  Time itself flows past.  Place is still.  It has an identity, a uniqueness.  Widows imply relationships—inside and outside, near and far, us and them, here and now, now and later, now and before.  Windows create self-consciousness.  I am Seer and Thinker.  I am Watcher, here and outside of here at the same time.  Windows produce levitation.  A window is a sense of self in time and place.  A window adds drama and historicity, makes daily life more cinematic and illuminates the inherent meaningfulness of the moment.  Add some music, and you’re life’s protagonist with your own soundtrack and the manifold minutes pass by the camera lens in an unfinished story of events and the beautiful stillnesses between them.