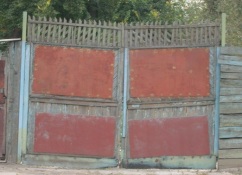 Kyrgyzstsan’s windows, gates, and doors offered a visual fascination that never grew old.  Their faded and peeling color blocks often reminded me of a Richard Diebenkorn painting.  They conveyed the same nostalgia but without even trying.

This is a Russian window on a Russian house in the once-Russian northern region of Kyrgyzstan.  I took the photo in 2004.  A few months ago, this article on Russian windows appeared in my Facebook feed:

I love the photos in this article.  And I hoped the text would both satisfy and fuel my fascination with the carved elaborations of Russian windows.  But not so much.  The article offered little and general information.  But there was some poetry in it all the same.

The wood carvings around windows were not just decorative but depicted symbols of nature that served as talismen, protecting a house from the “penetration of the dark and undead.”  Slavic people believed the sky had two levels—the firmament of heaven and the abyss of heaven—which were depicted with wavy lines, semicircles, and droplets.  A star inside a circle represented thunder and symbolized courage, valor, and magic.  It was called a thunder wheel.  I love that–thunder wheel!  Diamonds represented the sun or plowed fields, and the placement of the sun indicated seasons.  In the Soviet period, suns were replaced with flowers and five-point stars.  Animals depicted include horses, ducks, and swans.