On Saturday I spent a couple hours with an ice coffee and sketchbook at Java Shack.  After three weeks of nearly incessant rain, sitting outside in a shady spot on a sunny day felt profoundly good.

With a brush tip marker, I drew my view from the wrought iron table for two—a parking lot behind some buildings across the street. 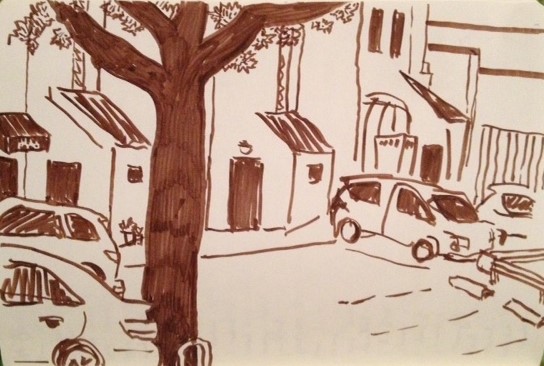 About a year and a half ago, I drew the same view.  It was some time in the fall.  I was frequenting Java Shack on Fridays, when I would write a poem on a postcard and send it off to a friend and fellow writer from graduate school.

Now I rarely go to Java Shack.  I’ve finished graduate school and have a job on the other side of the city.  My writer friend and I have a different project.  A lot has changed for me since my Java Shack days, and I thought the two sketches, a year and a half apart, might depict some significant change too, but I don’t find that they do.  Maybe the “Towing at Owners’ Expense” sign was gone on Saturday.  If it was there, I missed it.  And maybe that’s a new bike rack next to the tree.  But someone still keeps a couple flower pots out in the parking lot.  Nothing’s been painted.  The black awning is still going strong.

So what could I say about these two drawings?  I started writing about them in my journal: The tree gives structure and is the star of the drawings with its gesture, form, aliveness.  But the cars have personality.  Maybe they steal the show.  Both drawings feel crowded, especially the early one, which is toppling in on itself.  In the latest one, I left things out—the telephone poles and wires.  I cared less about the details of the buildings—the pipes along the walls, the corners, angles, precise dimensions and relationships.

It was somewhere in that last sentence that an image flashed into thought: Afsoon’s back yard.  Afsoon was my best friend from about 4th to 9th grade.  She was the only person in her immediate Iranian family who was born in the U.S.  What made me think of her yard?

Or maybe it was the fence.  Once Afsoon’s mom took us out the back yard and across the street to the back of a neighbor’s house to pick grape leaves from the bushes along a chain link fence.  She was making dolmas for dinner.  It felt weird to scavenge food on Old Glenview Road with the cars passing.  It felt like stealing and trespassing, poking my hand through someone’s fence.  Maybe it was the fence.

Or maybe it was the cars.  Afsoon’s brother, who always played “Rainy Day Woman” at top volume, who always left the house with a slammed door shutting down a yelling match with his mother, was always working on a car.  Parked in the front yard of their suburban home, a black Trans Am, an orange Corvette looked as out of place as a toothbrush in a candy dish.  Maybe it was the cars.

One of the hardest things for me when it comes to drawing is not overworking a piece.  Overworking kills the life inherent in gesture.  But I feel a drive to clarify and define that’s hard to resist.  I did a better job resisting on Saturday, leaving out the telephone poles, letting architectural details go unseen behind the tree, putting the fence in the wrong place, which is maybe the right place as far as the drawing is concerned, because in a way what we see is sacred, but in another way it isn’t.  In another way, what we see is never the whole story.

View all posts by elizabethsgpaul