I wonder who first described lawns as manicured.  It’s an expression hard to resist–it’s so on target yet out of the box in its connecting herbage to finger nails.  My guess is we like how the surprising association adds a touch of irreverence to the description of something so controlled, precious, and planned.  The expression is a little wild in its depiction of this cultivated characteristic of civilization.

Is it human nature to enjoy a little irreverence, to want to see at least one tiny hole punched in an otherwise perfect facade?  And what is the appeal of the faded and dilapidated?  I, for one, am easily charmed by unique surroundings such as the  weathered towns of Luquillo in Puerto Rico or Tokmok in Kyrgyzstan.  On the other hand, well-tended and planned-out places like American suburbs, including the one I live in, often provoke skepticism and rebellion in me.

I wonder how many people share my responses.  My husband has a much greater appreciation for the nice suburbs of the U.S. and is less impressed with the charm of disrepair.  I could chalk it up to our coming from different places–I from a Chicago suburb and he from a town in Central Asia–but I suspect more American suburbanatives would share his tastes than mine.  I wonder if that’s true, and if so, what’s up with my predilection.  But this is hardly the first time I’ve pondered this, and I do have some thoughts.

First, I know I dislike homogeneity, which the suburb where I currently live has in spades–central Arlington is a relentless pageant of brown contemporary apartment buildings.  I also have a snobbish distaste for the predictable.  Of course I like it in some things–the operation of a car or computer.  But as the dominating characteristic of my environment, I find it numbing.  I also value spontaneity, originality, and authenticity.  It can be hard to spot these qualities in a place where everything is pre-planned and highly controlled.  I’m also a connoisseur of warnings against “the planners.” John Berger, Wendell Berry, Walker Percy,  and Joy Williams illuminate the ways that planning (especially the planning of specialists) turns us into consumers and creates ignorance, complacency, and disappointment.  I’m thinking of Ways of Seeing, “The Pleasures of Eating,” “The Loss of the Creature,” and “Save the Whales Screw the Shrimp.”  Like predictability, planning has its value, and it’s something I do a lot of, as I suspect most of us do.  But these writers have persuaded me that planning should be questioned and even evaded.  In fact, I built a course around the idea.  But that’s another story.  On to the one at hand.

Well, I was leaving one of my Arlington cafe haunts when I noticed a refreshingly untended strip of earth in the parking lot.  It tickled my eyes, and I set my iced coffee on the ground and took some pictures. 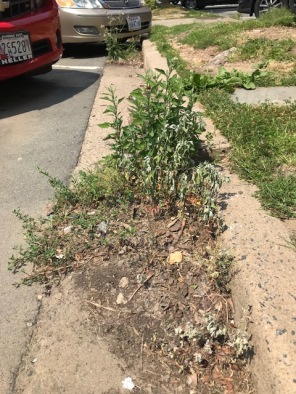 I thought, wouldn’t it be interesting to find as many of these untended places as I can and take some pictures?  Maybe they could inspire a poem or something.  And so I did.  Sort of.  I didn’t go out of my way, but I kept my eyes open for any raw spots along my usual paths through town.

It was even more difficult than I expected.  There were only a few margins where I encountered the unplanned. 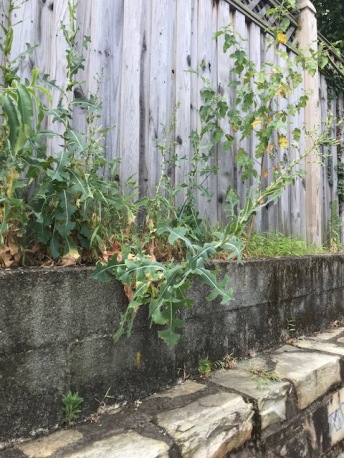 While I thought my project would enhance my appreciation of these rare bursts of spontaneity, it had a greater opposite effect.  I became more conscious of how thoroughly and consistently people care for this town. 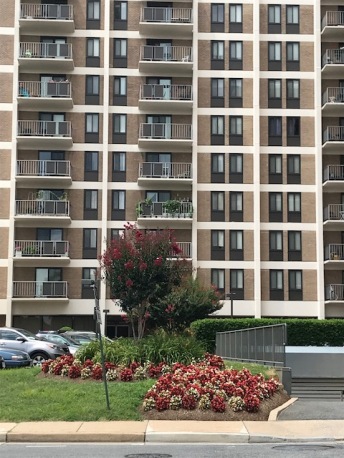 Planters in front of buildings, tree-lined streets, groomed and landscaped yards, and every opportunity for a park keep Arlington green, blossomed, sculpted, and composed.  My project evaded my planning.