Mondays get a bad rap, but when I start a new work week, I often find myself entertaining an attitude of openness that speeds my morning commute.  After a weekend knocking around the apartment and walking around town, it feels good to be in the car again, taking in the views afforded by the hills of Northern Virginia and enjoying the alchemy of suburban landscapes through the presence of crows.

But as the week progresses, I get more and more into the details and demands of work.  The mental landscape shrinks, and the days collect in my mind like playing cards in the hand.  I’ve got a Monday and a Tuesday.  I wonder if Wednesday will be like Tuesday or maybe like the last Wednesday life dealt me the week before.  I’m strategizing, predicting, planning, comparing, reacting, and lots of small preconceived notions pile up.

My schedule today is the same as on Tuesday, so today will probably be ____ again.

Sometimes preconceived notions help me manage my time and keep things in perspective, as when I remind myself how long it generally takes to grade a particular assignment and that grading marathons are only one part of my job.

But I wonder if preconceived notions, as harmless as they might seem, don’t precondition me to expect and notice certain things at the expense of others, constricting my view like a pair of blinders.

After two days of heavy rain, last Wednesday was sunny and blue-skied.  It was hard to miss the newness of that day as I drove into work.  The trees’ autumn colors were bold, and the smell of cold conjured memories of other places and times that enhanced my appreciation of the present moment.

During my walk from the parking lot to my office, a worm waved its curled self at me from a concrete step.  I continued on my way but then thought, there was no worm yesterday, and no one else may notice this worm on the steps.  I went back and, with a stick, removed the worm from under foot and placed it on the neighboring dirt.  It felt so good I was astounded.

Upon reflection, I think part of it was the worm but part of it was the thrill of participating in a day as something unpredictable and unique—something with a kind of autonomy, like a person you could meet who has a wealth of surprises to offer—something far different from the things we collect and chop up into hours and classes and meetings and meals and good things and hard things that happen to us.

I went into this week wanting to be more open to each new day and whatever unpredictable things, big or small, it might bring.  But I’ve hardly gotten any traction.  But I think that’s another thing that can block my view of today—wanting to find in it the good things of yesterday. 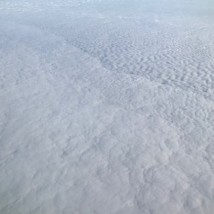